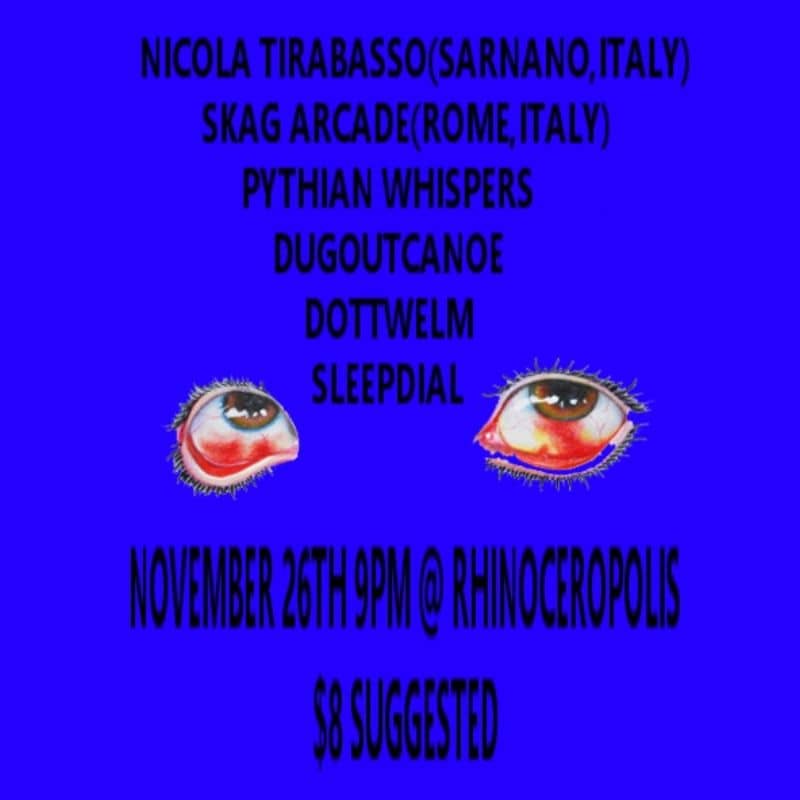 Today we’re so glad to present you the first entries on our RECORDING column which have not been taken on Italian ground. The occasion couldn’t be any special, being the two artists among the most engaging ones in the current Italian experimental / noise scene, and considering that the second entire set refers to a live debut. Nicola Tirabasso [Sarnano, Italy] and Skag Arcade [Rome, Italy] are touring the US in some sort of punk revival of the great Italian Diaspora: in November the 26th, 2016 they stopped at Rhinoceropolis in Denver, Colorado, and right here below – after a brief presentation of their musical research – you can enjoy the whole recorded sets via our mixcloud channel. This article features also some Nicola Tirabasso’s words about the current state of things after the Oakland Ghost Ship fire tragedy that shocked the musical community in the US. 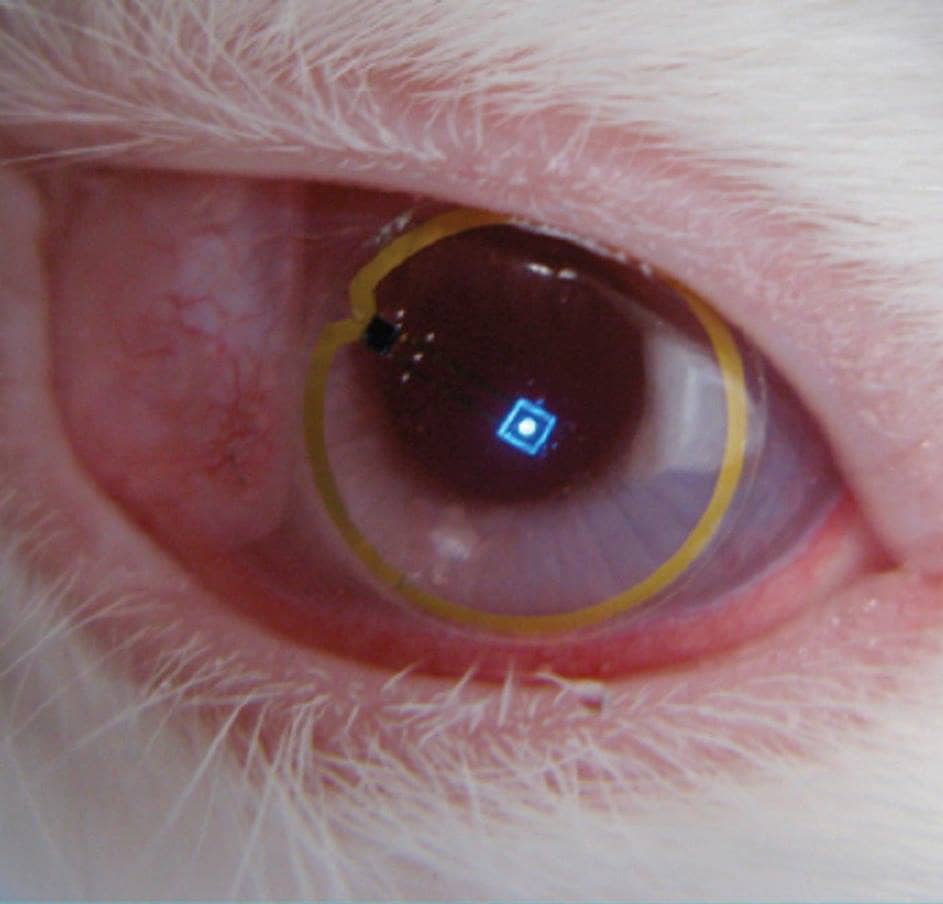 A mice eye about to be vivisected via a hi-tech procedure; unknown source

Coming from the Italian region called Marche, Nicola Tirabasso is a multi-disciplinary artist working as music composer, videomaker, graphic artist and film curator. Recently he moved from Milan, city where he previously settled and began embedding his activities in the local scene, all over to Oakland, California to work as film director on a documentary about the decolonization of sound. His portfolio features collaborations with a large number of artists, labels, galleries and other spaces both European and in the US -such as, in random order: Artetetra (IT), Entertainment System (Ohio), Terraforma Festival (Milan), Placenta Recordings (Detroit), Multiversal (EU), Gallery 1412 (Seattle), Macao (Milan), Møè Gallery (Vien), Kink Gong (France). Early this year he founded the no-profit organization Nocturnal Reflections based in the amazing Macao space and devoted to experimental cinema and video art; Stan Brakhage, Ben Russell, Sun Araw are just some of the authors starring the series.

Nicola Tirabasso’s music is the result of a fusion between the filmic image aesthetics and the construction of sound on it. His performance creates a dilated spatial and temporal dimension, developing a sonic-perceptive dialectics around the concept of repetition (loop) using cut-ups, field recordings and electronic frequencies. His idea of music is close to an intimate experience, exploring territories that overlap with ecstatic music traditions.

Tirabasso’s sonic ventures brought him to release ‘Soundtrack for Acariño Galaico’ (2014)  and ‘Landscape Suicide’ (2015) for the Italian collective ArteTetra. The first of the two, in particular, stands as a complete score for the Andalusian Jose Val del Omar’s documentary ‘Acariño Galaico’. The experimental film-maker died in a car accident in 1982 leaving unfinished a whole bunch of video/audio material that was thought to expand the visual experience for the user through the usage of experimental techniques. Nicola Tirabasso followed the lead re-imagining the spooky video suggestions via the audio medium, and the result can be seen in an edited version – the original one was released on VHS format – right here. NT’s latest music release instead, called Sounds From The Cosmic Silence and out July 2016 on the Ohio-based outcome Entertainment Systems, is an immersive space odyssey which has been composed by using only sounds such as planets electronic vibrations, magnetosphere resonances and NASA-recorded radio waves trapped into the Earth’s atmosphere. 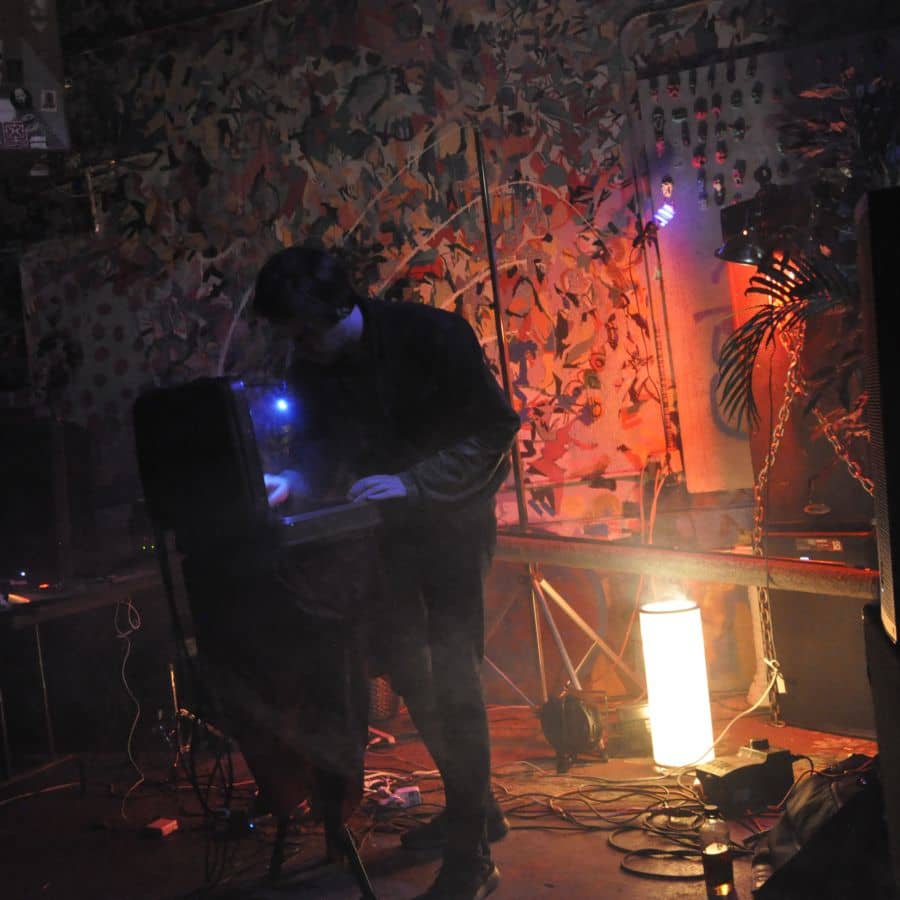 The artist will perform in Detroit tomorrow (12/20/16) as the headliner for the Placenta Recordings / Hybrid Moments event BLACKxxxMASS ON A TUESDAY, also featuring the 3 piece alien ensamble of harsh noise from Detroit, Michigan known as Dental Work and many other extreme acts you can discover following the FB event link. Finally, the live set we offer you to listen today, to put it Nicola’s own words, is a mesmerizing ‘deconstruction of samples, captured from contemporary digital soundscapes, melting chaotic sound explosions and new age synths pads; a psychedelic journey into the digital dimension as a diamagnetic feeling between fear and pleasure’. Enjoy it through the player right above here, and come back to reading for there’s still Skag Arcade debut live set waiting for you.

Last Christmas (yeah, we’re about to dig up some higher-level pop-culture reference here) we gave you Skag Arcade’s heart, offered in the form of a horror / noise-drone mixed sequence: THREAT#5: Special XMAS Dismal Mix. We’re flattered to feature him again on our pages almost exactly 1 year later, and to host his world live debut (some video footage of the show is also available here):

Born as a laugh in the middle of 2014, the Skag Arcade project – whose moniker is an oxymoronic analogy/crasis for Hüsker Dü & Squirrel Bait’s respective masterpieces and mankind-saviour-records Zen Arcade and Skag Heaven – is a testament of a radical audio investigation of the most morbid sides of human nature and the ineluctable abyss where it lies, rotting.  After the cooperative 4-hands work ‘Fernweh’ together with meanwhile.in.texas we already talked about, the musician released later this year the C30 tape ‘Pentagram’ single on the Spanish Craneal Fracture Records imprint, followed by ‘The Look Of Silence‘ full-length cassette for Orb Tapes from Pennsylvania, US, conceived as an elegy for the millions of forgotten victims of the 20th-century genocides that took place in the Southeastern regions of Asia (videoclip for the title track: here).

Skag Arcade’s sonic counterpoint to the desolate gain of awareness of the irreversible state of decay of human decency shapes up a blunt journey in between the analog and the digital world, where vivid concrete sound frames collapse into a chasm of harsh noise assaults. With sources of inspirations as heterogeneous as William Burroughs, Iannis Xenakis, Shinya Tsukamoto, Mark Hollis, Coil, Roberto Bolano, Eliane Radigue, Pan American, Stan Brakhage, Marco Corbelli and Luigi Russolo, Skag Arcade pays his humble tribute to more than 100 years of revolutionary cultural iconoclasty.

Due to 2017 is the second chapter of Skag Arcade / meanwhile.in.texas collaboration, and many other surprises too we’re not allowed to reveal yet, so stay tuned and have an uncomfortable time listening to the 54-minutes-long harsh parade.

The Oakland Ghost Ship Fire, and its consequences all over the country

Last December the 2nd a fire at the Ghost Ship warehouse in Oakland killed 39 people, becoming the deadliest structure fire in California. The catastrophe has devastated Oakland’s musical and cultural community, which lost dozens of artists and musicians. The occupied space also used to offer shelter to about 20 people at the time. The consequent mass hysteria caused many other aggregation diy centers to be evacuated: the praiseworthy Rhinoceropolis is among them, and it appears the night in which the show we’re referring to was hosted were among its very last ones.

Among the victims are Charlie Prowler, one half of the synth-pop duo Introflirt; Brandon Chase Wittenauer, part of the musical duo Symbiotix.Fungi; the 22 years old Cash Askew, one half of the ethereal, shoegaze, post-punk duo Them Are Us Too, signed to Dais Records. Just to name a few. The full list is available here.

Nicola Tirabasso himself wrote us few words about the horrible, dangerous situation US autonomous spaces are going through at the moment:

“Right now the art community of Oakland is shocked about the tragedy happened at the Ghost Ship warehouse where few weeks ago 39 people lost their life. Oakland boasts a constellation of seemingly derelict warehouses, storefronts, and churches. Within many of their shabby exteriors, however, are places of creative invention and possibility. These homes and venues—known by cryptic names rarely recorded in the press—cradle scenes that slip between categories; they’re where as-yet-unnamed subcultures gestate. For non-conforming bodies harassed and abused at other clubs, they’re like sanctuaries. The impact of the tragic fire at the Ghost Ship artists’ collective is reverberating far and wide. Also for the Rinocheropolis in Denver, as a witch hunt actions all over the country. Rhinoceropolis  have hosted many performances by musicians and other acts in the DIY community, all without incident. But apparently the Denver Fire Department, responding to complaints in the wake of the tragedy at Oakland’s Ghost Ship DIY space, did a quick inspection and determined that potential fire hazards made it an unsafe building.”

You can give your support to the cause via lots of fundraising campaings that started from all over US after the sad occurrence in Oakland. Click here to support Rhinoceropolis and give your money contribution for the place to be opened again.