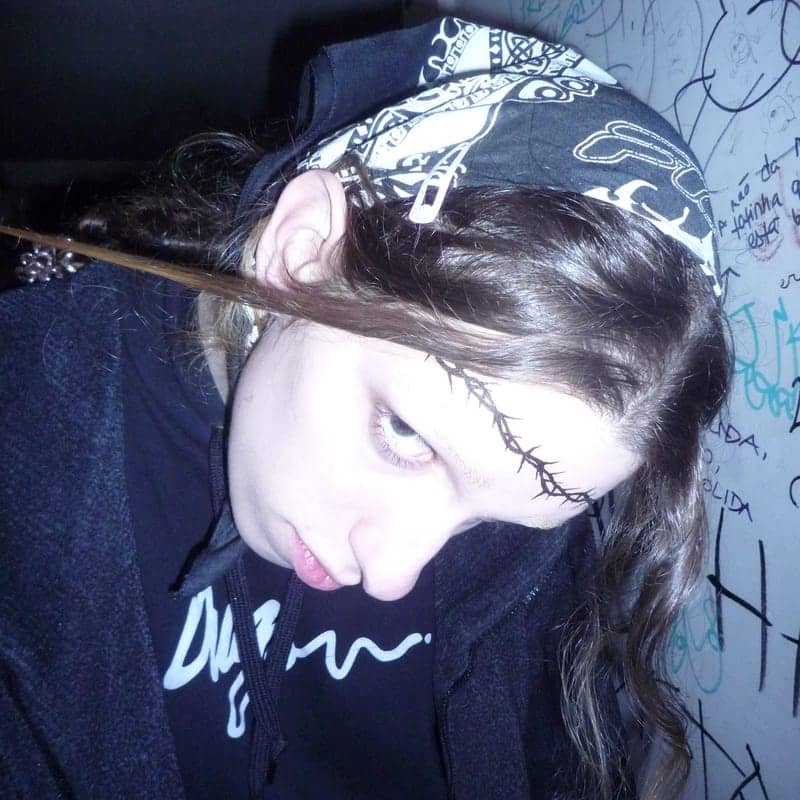 Odete is a producer, DJ, performer, femme and queer activist, poet, theorist, +++ based in Lisbon, affiliated with the Troublemaker Records and Circa A.D. Portuguese communities: the former is a collective started in 2018 and comprising artists such as PHOEBE, Herlander, NESS, Killian, and Fylha; the latter is instead a digital record label managed by the collective efforts of Stasya, Saint Caboclo, and GYUR, and already responsible for two killer various artists comps gathering a huge amount of producers from all over the fem/queer (+ allies) community from the digital underground.

Both united in the concept of promoting profit-free, DIY aesthetics, Troublemaker and Circa A.D. are two of the leading agents in Lisbon and Portugal’s music scene that has been emerging over the last few years as a reaction to the stale, boring, and heteronormative techno slash tech-house slash house slash disco mainstream shit dominating Europe (as brilliantly put by Gabe Meier: “all that is solid melts into business techno“). Odete‘s music surely figures among the most inspired outcomes in this scenario, thanks to her stunning releases that you can stream here, and her cutting-edge mixes one of which we’re really honored to be featuring today (find the Mixcloud player at the end of the article).

I’m surrounded by beauty [via]

Odete, other than a prolific composer and mesmerizing performer (as also confirmed by her background in performative theatre), is reportedly an all-round artistic researcher in the “sensations of belonging and awakening, trans narratives and ways to make sadness, fragility, and failure visible as political powers“. In the list of her main sources of inspiration appear artists like Arca, Juliana Huxtable, Quay Dash, and Serena Jara, but one could go on to enumerate also authors such as Donna Haraway, Simone de Beauvoir, Ursula Leguin, Herculine Barbin, and many others.

Odete’s work is set to question the meaning of human existence in late-stage capitalism, the perception of ourselves, fueled by the desire to overcome binary codification. In particular, it meddles with the concept of being a performing trans woman, while never losing sight of the final goal: the destruction of the patriarchal capitalist system as the major source of social disparities and oppression. To this end, Odete longs for the affirmation of a global, digital, queer collective that would be able to bring together different individualities in a moment of shared vulnerability in which “bodies are diluted and lost, narratives are confused, and borders are expanded“.

From a strictly musical point of view, this translates to a very rough and aggressive, yet delicate and cathartic cauldron of “vogue claps, sapphic fragments, industrial beats, punk screams [via]” that is closely related to the outstanding productions of the never forgotten 🌸 Reélle as it is to Serial Experiments Lain. Her tracks are composed of several audio sources ranging from pitched and screaming vocals to noisy, lo-fi field recordings, at times embedded in a crude, shattered rhythmic progression, at times framed in eerie compositions of atonal sketches of warm, life-affirming sensitivity.

Odete’s broad-range opus is well represented in her latest EP called Water Bender, which appeared a few days ago on the London-based community for women, LGBTQIA+ artists called New Scenery, featuring four solo tracks (+ 1 bonus), two remixes by Herlander and Jasper Jarvis, and two collaborations with the amazing Bleid and DRVGジラ. The record tells the eventful, Greek tragedy-like story of the heroine which will ultimately meet her destiny, through passionate pieces of harsh and uncompromising music that’ll leave you oozing with a mixture of nervous sweating and tears of revelation. You’re finally surrounded by epiphanic, catastrophic beauty.

Before pushing the button, remember to follow Odete on Facebook and Soundcloud. And while you’re at it, grab the latest release over at Circa A.D.’s Bandcamp.