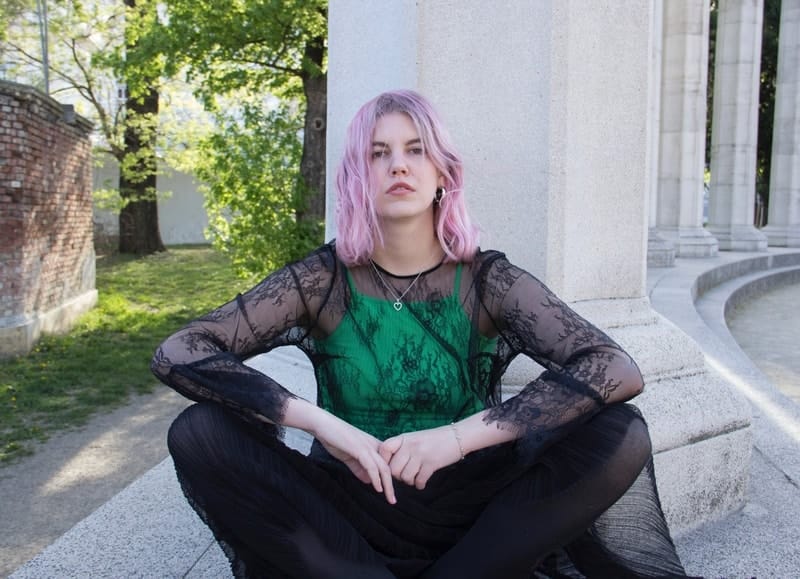 ANTONIA XM is a musician, producer, and DJ from Vienna, co-curator of the hybrid club / digital life label Ashida Park that we already had the chance to host on our website on a couple of occasions. After starting earlier this year with the amazing A token of friendship series of free download tracks from different producers moving in the post-club URL scene, the Viennese hub released last week Antonia’s debut 2-tracker single called Flawed, available on all platforms with mastering by Michele Sinatti and additional mixing courtesy of Parsa Sarraf.

Antonia, who started DJing in the early 2010s, has been releasing and playing tracks from all kinds of genres and scenes, ranging from dark ambient and experimental music, down to hyperemotional melodic pop compositions and various forms of bass-heavy club tunes (techno, hardcore, trance, speedcore). Flawed marks instead the first track featuring her own vocals, used as the main creative tool together with dreamy/eerie melodies to craft up an extremely dense, emotional, and heartfelt piece of music.

To celebrate the release of this seminal work in her musical path, we reached out to her to ask a few questions covering specific aspects about Flawed and the intro skit called Intro (Cut and Run), as well as more general inquiries in her background, recent activities, and future solo/Ashida Park plans. Enjoy!

Q: Hi Antonia, thanks for being with us today! We had the chance to listen to your debut single “Flawed” last week and we enjoyed it a lot, especially the heartfulness and intimacy of the composition. We’d like to start this interview by asking you when and under which circumstances did you start working on it. Also, what was the urge that motivated you in the first place? In particular, can you pinpoint a specific reason, event, or whatever that compelled you to start incorporating your voice in your own productions? Or, on the contrary, is it something you’ve always been thinking of doing sooner or later?

A: I’ve actually been singing all my life, I even studied it at some point. But then I just became way too interested in new and experimental forms of electronic music and in DJing – I couldn’t think of a suitable way for my own voice to find a place in that. After I started producing music myself I started to make peace with my voice and I guess I thought I’d just give it a try. Part of the music and lyrics of “Flawed” I wrote many years ago on acoustic guitar, long before I knew a thing about any DAW.

Q: Have you been facing any challenges during the conception and then actual production of “Flawed” (emotional, technical, etc)? Was it a revelatory, cathartic experience overall?

A: I could probably list a thousand technical and emotional issues here but in the end, it all comes down to being extremely insecure :3 However, the process of releasing Flawed was very beautiful. I wrote the song in a phase of my life that was extremely difficult and I just put all the emotions that were haunting me right into the track. Releasing it also feels like releasing those emotions and starting to move on.

Q: You reportedly stated that the spoken-word “Intro (Cut and Run)” “is a cynical tribute to a semi-fictional, toxic guy who ‘signed one to three petitions’ and wants heavy credit for it, has a hard time ‘believing the truth’ these days, mostly talks before listening and is ‘not gonna be complicit, but also won’t offer resistance’”. Can you tell us the reason behind your decision of opening the release with this particular introduction? How does it integrate with and relate to “Flawed”? Were they conceived at the same time or does one predate the other?

A: I originally wrote the intro for another track – a super tacky trance tune, I just gave it a listen and had to laugh out loud. At some point, I tried to integrate it in “Flawed” and it just felt right… The lyrics from the intro are not directly connected with “Flawed” but come from a similar, frustrating place. ‘Intro’ and ‘Flawed’ were only one track for the most time. Then I thought it might be annoying for people to listen to the whole intro if they wanted to hear just the song so I eventually separated them.

Q: Something that we’ve been finding over and over in your musical activities, both with your solo project and with Ashida Park, is a strong passion and sense of urgency that animates you, as if music could really be the fastest way of connecting with someone and creating meaningful experiences (whether URL or IRL). We also find this somehow in the fact that you’ve been meddling with many music genres, from dark ambient to 200bpm hardcore via mainstream pop blends, as if you were steadily escaping any limitations or barriers of sorts. Have we been reading too much into this? If not, how is “Flawed” part of this process? Is maybe this deeply intimate composition your way of taking a stance, embracing vulnerability, and refusing apathy?

A: Yes, it’s all of what you’re saying. There are so many different forms of music, emotions, people, cultures, identities! I think we should finally embrace all of them and I simply don’t understand the idea of constantly limiting yourself and others to only one thing. This counts for music as much as it counts for everything else people choose to be or not to be.

Q: Let’s now dig a bit into your past: when did you start DJing and where was your first gig? What music genre resonated most with you at first? How did your musical taste evolve over time, and how has running Ashida Park affected the process? Can you name the latest genre or style you’ve been obsessed with?

A: I got my first turntable when I was 16. I only had one though, so, at first, I just played mp3s on one channel, then tried to beatmatch the vinyl on the other. At that time, I was extremely into UK Bass and Post-Dubstep.

I had my first official gig at a party organized by my older brother at Café Leopold when I was 17 (ahh this is almost 8 years ago). That’s a cute story actually: Mount Kimbie was DJing that night and I was their biggest fan at that time so I was extremely nervous. I only made it to the club convincing myself that at least they’re not gonna hear my shitty DJ set because I’m opening the night. When I arrived at the club, they were there and I told them to please not judge me – they answered that they’re extremely nervous too because it’s one of their first DJ gigs ever. In the end, they loved my set and we had a fun evening together.

My musical taste just changed back and forth over the years. I think I played everything from Rap and Grime to Reggaeton, Noise, Ambient, Techno, Gabber, Pop, Speedcore,… I was always into a specific aesthetic rather than a certain genre. Normally the thing I hate the most becomes the next thing I love the most. I think running Ashida Park just helped me to keep an open mind. It also showed me even more weird genre possibilities like idk for example Ambient-Gabber or Reggaeton-Lento Violento.

Q: You’ve also been KeKe’s DJ on tour over the past year, how did this experience influence you? How is this kind of DJing different from the one you would usually perform in a club setting as Antonia XM? Is there a specific memory you’re particularly fond of?

A: It’s very much different from my usual gigs because it’s mostly in big spaces in front of a huge crowd and I usually play very short solo sets (around 10 mins) before KeKe comes on stage. Naturally, the music I play then is also very different from the music I normally play because it’s impossible to build a hard dance or experimental set in 10 minutes.

I remember when KeKe and I were both on our first proper tour where we played gigs in different cities every day: we were so exhausted and tired after some days that we couldn’t imagine ever going on stage again. But then we always had these cute, small moments before entering the stage where we would reassure each other, do some weird dance moves, or just laugh about ourselves.

Q: Finally, one last question to close the interview: do you feel “Flawed” might be a stepping stone in your future productions? Can you (or do you even want to) imagine how things might evolve for your project in the immediate future? Are there other things you specifically set your mind on? Thanks again for the nice chat <3

A: I definitely want to do more vocal stuff. It feels less scary to share my voice now that people have already heard it anyway. Then again, the next track I’m releasing will be a Techno/Gabber-Remix of Lamb Kebab and DJ GHEPARD. As always I don’t really want to limit myself to one thing I guess… so who knows ◕‿◕. Thank YOU <3