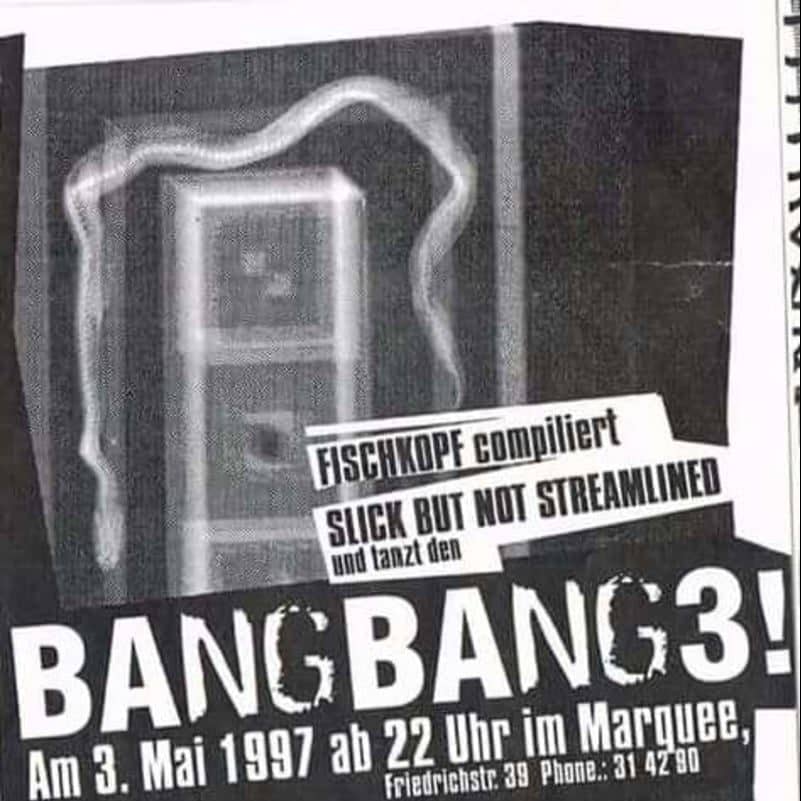 [About the artwork: “Bang Bang was a series of parties in Hamburg 1996-1997, hosted by the Fischkopf Crew. As far as I know, it was 4 parties in total. Acts that played were Fischkopf artists like Taciturne and Amiga Shock Force but also international acts like La Peste, DJ Entox, and Static Tremor. The venues were quite small, around 50-100 people were at each party. The sound was Experimental Hardcore and Speedcore”]

Hamburg (aka the Free and Hanseatic City of Hamburg: Freie und Hansestadt Hamburg) is the second-largest city and a state of Germany, with over 1.7 million inhabitants. His official name reflecting its history as a member of the medieval Hanseatic League, a free imperial city of the Holy Roman Empire, a city-state, and one of the 16 states of Germany, it became a civic republic in 1919, ruled by a class of hereditary grand burghers. Though repeatedly destroyed by the Great Fire of Hamburg, the floods, and military conflicts including WW2 bombing raids, the city managed to recover and emerge wealthier after each catastrophe. On the river Elbe, the city is a major port and a global service, media, logistics and industrial hub, other than an important financial center for centuries. Hamburg is also a factor in world politics and international law, having hosted such meetings as the EU-LAC Foundation, the UNESCO Institute for Lifelong Learning, and in 2017 the G20 Hamburg summit [via].

Hamburg is a major European science, research, and education hub, with several universities and institutes that helped giving birth to a lively cultural scene out of which emerged movements like Hamburger Schule. Talking about underground music, the city was a major centre for heavy metal music in the 1980’s, where bands like Helloween, Gamma Ray, Running Wild and Grave Digger started and contributed to establishing the power metal subgenre; also the industrial rock band – performance art project KMFDM was formed in the city in 1984, pioneers in the crossover between Techno/Dance/EBM electronics and guitar samples. Surprisingly enough, Hamburg was the city where The Beatles’ career took off (and also Tokio Hotel’s, but let’s just forget about that). But, of course, our focus at the moment is not on shitty pop bands. Today, we’d like to talk about the late 90s unsung and obscure hardcore techno scene, told and mixed by one of his main characters and supporters: Sönke Moehl, better known as Low Entropy. After releasing incredible material on pivotal labels such as Black Monolith Records, Suburban Trash Industries’ Kougai, Praxis, and Widerstand, he started his own Doomcore outcome we recommend you check out immediately (the label and its owner have been particularly prolific this year, you can get updates checking his official FB page). Sönke’s also a fine reporter of the scene he witnessed and helped to shape, completely unknown to the large public even today. He wrote dozens of essays collecting information and reviews on his EEAOM blog. He’s been trying to tidy up the whole amount of messed-up details about the fervent period, with dedication and devotion.

We’re honored to share with you an outstanding 105-minutes-long mixtape collecting some of the more remarkable Hamburg Hardcore Techno episodes that emerged in the late 90s on outcomes such as Container Records / Fischkopf / CFET, Nordcore, Blut, and much more else – the tracklist is available at the end of the article. Right here below the mixcloud player, find attached a complete list of all the articles Sönke wrote over the years. Have a good read and listen carefully (headphones required)!

Since German reunification in 1990, and the accession of several Central European and Baltic states into the European Union in 2004, the Port of Hamburg has restarted ambitions for regaining its position as the region’s largest deep-sea port for container shipping and its major commercial and trading center. As such, it was always also a hotspot for a wide range of subcultures, cranks, and crooks, rowdy sailors, prostitutes, pirates that found their place in shady pubs, back alleys and similar dark places [via]. Also a long-been centre of alternative music and counterculture movements, the city hosted many important poles: the boroughs of St. Pauli, Sternschanze and Altona, known for being home to many radical left-wing and anarchist groups; the Rote Flora, a former theatre squatted in 1989 in the wake of redevelopment plans for that area and, since then, one of the most well-known strongholds against gentrification and a place for radical culture throughout Germany and Europe.

“I entered Hamburg in 1980 by birth, so I can’t tell you much about the 60s or 70s of Hamburg, but in the 80s, it was a place for anarchists, punks, rioters and similar people – creating the current for places of alternative music and political views to be set up” [Low Entropy]

As Sönke Moehl told us himself, he discovered the world of hard, experimental electronic music in 1996 and immediately fell in love with it, struck by the extreme energy and passion put in it by the gang of sonic terrorists operating in the community. One year later, he started creating his own music mainly focusing on experimental hardcore, breakcore, and speedcore. The first release (as Low Entropy) surfaced Blut records in 2000: the abrasive super-fast Anti-Sedative EP. Later that year, Sönke and Betty Bombshell (2000-2001) began broadcasting on the terrestrial Hamburg-based radio station FSK (check the first show ever here), hoping to feed those hardcore sounds to the yet unaware public. After Betty left, he teamed up with Sampler19 (and later on The Man Unknown and DJ Escada) creating Hamburg Hardcore Radio show/crew, also hosting many all-night shows with lots of guest DJs. 2002 was the year of the debut on Praxis and Black Monolith (with Anarcho-Psychotic EP and Acid Massacre 12-inches, respectively, differing a lot one another), and also of the launch the All-Out Demolition! parties in Hamburg with the whole radio crew again.

In 2003, he released a self-titled album spanning a wide range of genres such as breakcore, noise, ambient, followed by a sudden 5-year hiatus that brought him back to the scenes in 2008. “My main focus had been Doomcore and EEAOM blog since then []; I released on netlabels like Viral Conspiracy, Legs Akimbo, Doom Nation as well as on my own private Bandcamp“. In 20 years of doing music, I had over 100 releases and produced over 1000 tracks.

A COLLECTION OF ARTICLES BY LOW ENTROPY