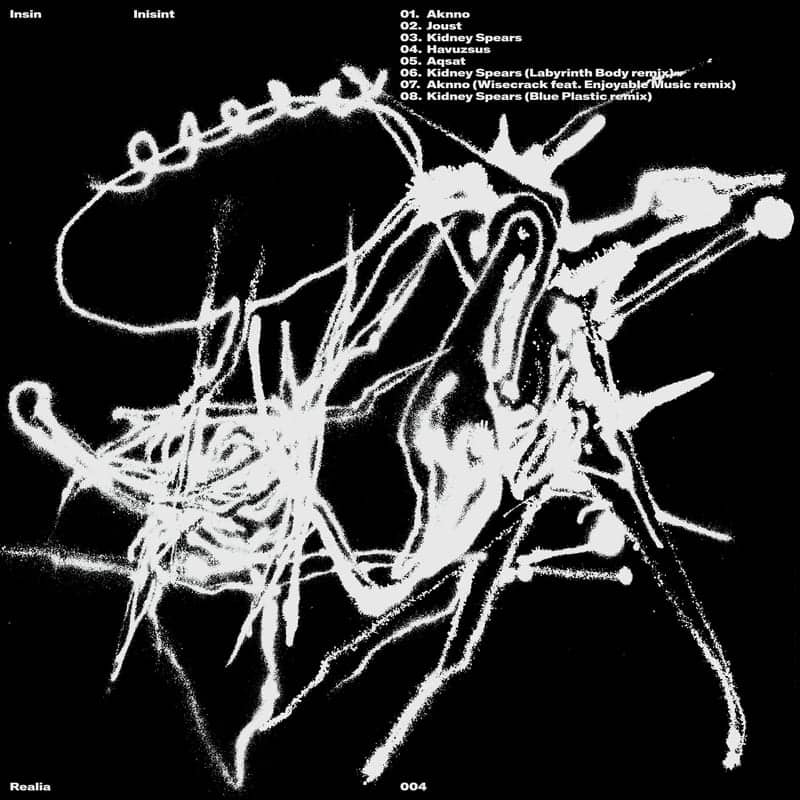 ‘Inisint’ EP by Insin, due to be released December the 20th, 2019, is the latest entry – the fourth – in the REALIA catalog, the label/collective/publishing act stemming from Milan. The five-tracker, completed with three remixes, is a work by the duo composed of Bashar Suleiman and Freya Edmondes aka Elvin Brandhi, respectively a producer and MC from Palestine, and a producer and vocalist based in Vienna. Already appeared this year on Hizz and Amen with their Sadsun and INSINCERITY outings, the ultimate result of their fruitful partnership is an EP which collects cutting-edge electronics, outstanding vocal performances, and clashing rhythms integrated into noisy soundscapes.

Started last year in Cairo, Egypt, the Insin outcome has been crafting unstable compositions of spiking stimuli drawn from state-of-art trap tunes as well as the late 2010s deconstructed club explosive aesthetics. Aligned with the two previous aforementioned released, Inisint EP sound as the conclusive part of a 2019 triptyque which secures Insin’s peculiar and multi-faceted style into the list of the most interesting contemporary acts, also thanks to their uncompromising presence on stage.

The tracks are assembled together as a freeform architecture, wherein a great variety of biodigital elements become the constitutive parts of a polymateric sculpture—crafted with sound and to be handled with care.

We are so happy to be premiering today the second piece on the Inisint EP tracklist, namely Joust, recorded and composed by Insin, and mixed by one of REALIA’s members, Noumeno. An outstanding post-grime masterpiece, Joust bridges together heavy, variegated drum patterns with a hopping melodic lead in whose gaps perfectly crafted quiet-loud dynamics settle in. You can discover the four other pieces of the work by getting your own digital copy of the EP on REALIA’s Bandcamp starting next Friday, Dec the 20th (https://realia.bandcamp.com/), something that we highly recommend.