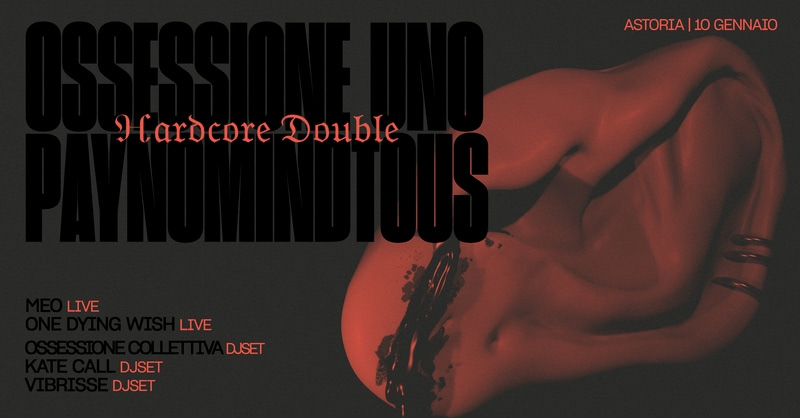 🌀 MEO live
https://youtu.be/V4aRoqkRlwA🌀 One dying wish live
https://onedyingwishpunx.bandcamp.com/🌀 OSSESSIONE COLLETTIVA dj set
https://facebook.com/OssessioneUno/🌀 KATE CALL (Caterina De Nicola) dj set
https://youtu.be/MfQlHYUaJnw🌀 VIBRISSE dj set
https://soundcloud.com/vibrisseduo
***
What [does] it mean to put forth a physical strain to the point of exhaustion, transcending certain levels of calm reasoning, into an experience not unlike the attempt to escape the cages that are our bodies? To be somewhere else besides trapped in the total hell of our wants and continuous strife? To point [ourselves] towards the path away from this body and the hell it resides in? The goal is to bring back previously hidden, repressed, or dormant aspects of ourselves like conscience, ambitions, and affirmation against social or cultural odds, [which are] not available in a reserved state, but only in moments of trauma of mind. [We] used to unlock a spiritual side to a performance. Hardcore is where we’ve found our voice.We would usually [psyche] up kids on the vague yet alluring ideas of a rave party that they could mosh to […]. After the last band we’d start the “rave” […], it was a very true example of the party being about the people and not [the] performer. Kids were at first fairly confused, and rightfully so, but we had at least a few who […] would get everyone pumped about it. By that point there would be a total frenzy of kids with their fists in the air, moshing and yelling wildly, running laps around the room. [We were] changing kids’ idea of what a show can mean; what FUN can mean; in the face of a city that offered no help in our struggle for a vital and radical identity!
https://youtu.be/FqkZFmj1uwo
VIDEOREPORT