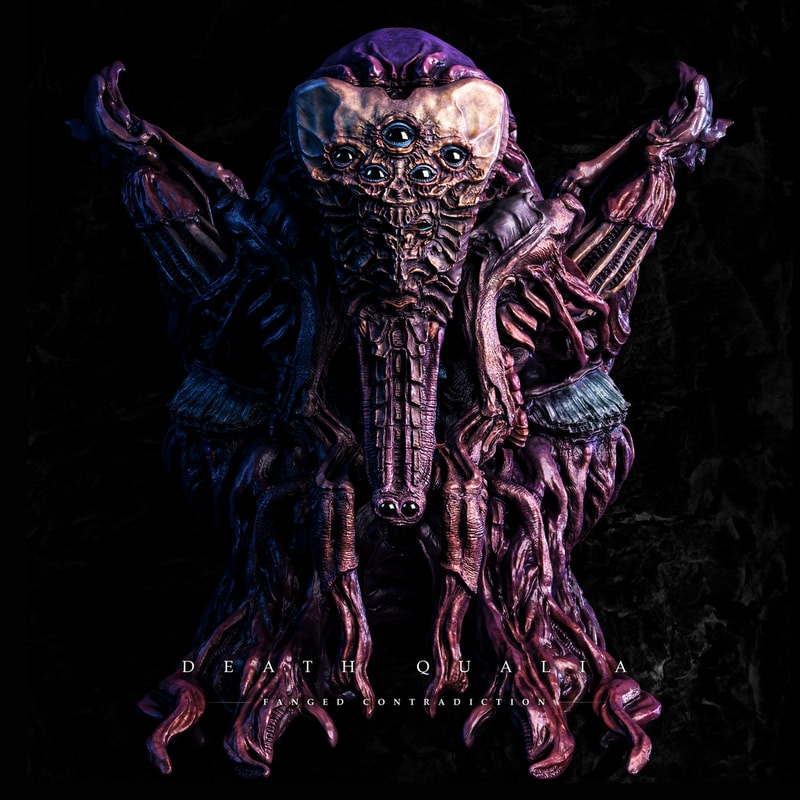 Ohm Resistance is a Brooklyn-based record label started in 1999 and owned by Kurt Gluck aka Submerged. The very influential outcome, reportedly a specialist in “subsonic grief-bass programming“,  is renowned for its dense catalog which first hosted Mick Harris’ Quoit breakcore outings, several Bill Laswell‘s solo and collaborative works, as well as numerous releases by the founder himself. Recently focused on the most cutting-edge expression of modern industrial and dub electronics, such as productions by the likes of Homemade Weapons, Dadub, Diasiva, and Speak Onion, the label is now about to publish the 6-tracks Fanged Contradiction EP by Jonathan Baruc, disguised as Death Qualia.

Also active with the brilliant DEFCE duo together with Clem Von Holstein, the new EP marks another step in Baruc’s solo musical vicissitudes after a 3-year hiatus, coming after a plentiful of outstanding releases on labels such as Splatterkore, Private Archive, Portals Editions, and Entity, and the stunning production for hip hop cult artist Zebra Katz‘s debut album. Fanged Contradiction, produced by the US artist and mastered at the Dadub Mastering Studio, is a rich compendium of blackened drum and bass, booming overdubs, and rattling violence.

As stated by Jonathan himself, now Berlin-based, the record marks the start of a brand new phase in the project’s ten-year life, one that will be known for “collaborating a lot more and spending a lot less time in front of my computer and machines alone: music’s meant to be fun and shared, I want to push that more“. Surely enough, the vibrant work collects variegated influences and styles, spanning from contemporary deep dnb to the finest sound art, going through dub techno and even flashcore, yet always tapping into Baruc’s own background in power-electronics and 80’s industrial music. In the record, throbbing frequencies in the low-end spectrum bounce off in abrupt bursts of damned bass rage, defining a new path in his productions suspended between cinematic ambiance, hyper-techno, and surgical (almost harsh) sound design.

The Fanged Contradiction EP will be released on October 10th digitally and on 12″ vinyl, also coming with two aggressive pieces of artwork by Nicolas Berger depicting a Cthulhu-like, menacing creature crawling out of the deepest lariat in all its undead majesty. Today, we’re very glad to be premiering the fourth track on the list, namely the B-side opener “Curb Your Fanged”. Possibly the most violent outing on the record, the piece attacks the listener via a barrier of quadruple-time kicks and the creeping noise of invertebrate beings scheming in the dark, resulting in a memorable and shocking sonic assault. Push the button!

Follow Death Qualia on Soundcloud, and pre-order your Fanged Contradiction copy of at this link. Check out the Ohm Resistance catalog here.