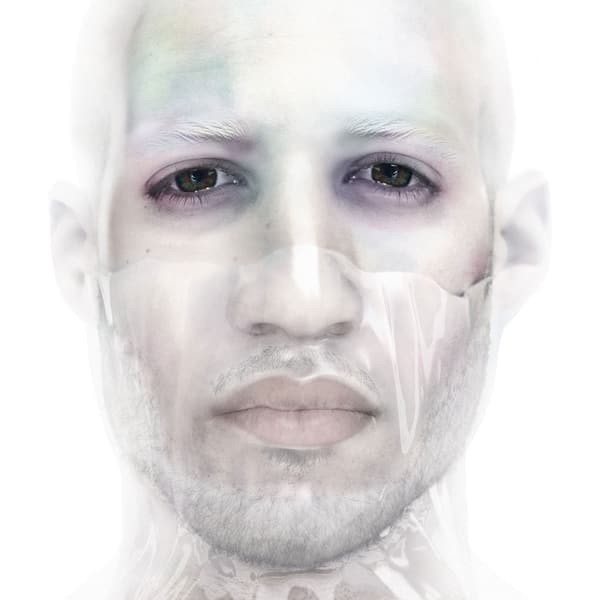 The LP was mastered by Jeremy Cox and cut by Rashad Becker at D&M, and pressed on 140g LP and CD.  It features photography & artwork by Daniel Sannwald and layout by Bill Kouligas.

Comfort, protection, salvation – this is what we search for. We are taught that a life of no worries is better for us, and therefore we try to create one that is Safe. Louis Carnell

Visionist is Louis Carnell, from London. His debut album was out on 8th October 2015, published by Bill Kouligas‘ PAN. The album comes as a milestone of the producer’s career, and stands as one of the most interesting releases in 2015 for sure. PAN is scoring another great result for the year, after M.E.S.H.’s Piteous Gate, Lee Gamble’s last 12”, Olympic Mess by Helm (Luke Younger), and many others. Carnell’s record is clearly pushing foward the sound of the city he comes from (London, UK indeed) in terms of down-town electronic music production (downtown as a matter of mood, not of social strata).

The producer is one of the main exponents of what can be considered the second generation of grime producers, as already pointed out in the fundamental Big Dada Recordings‘ 2013 quad-vinyl compilation called Grime 2.0 (a track by Visionist appears on it, Dem Times). Safe is the final (yet) step of a sophisticated process of definition both in sounds and production skills. In this sense, the most affine release from the producer’s past releases is of course I’m Fine, Part II EP on Lit City Trax (on the label some juke/footwork heroes such as the beloved DJ Rashad and Traxman, and youngest producers like DJ Marfox). The EP and the album are sligthly different one with respect to the other, yet they are similar enough considering the stress on processed vocals put in such tracks like More Pain, The Way, and First Love (on the EP) and the dominant use of human voice all throughout Safe. However, the differences lie in the fact that the latest record has been realized following a way more minimalistic take on music production, which is focused on a very small number of sonic sketches defining the development of each track. It seems Visionist wanted to leave enough room for the listener to throw himself in the open spaces determined by the rarefied use of vocals, beats (only 3 tracks out of 12 show a prominent use of them), never-random whistles, creakings and arid lullabies. However, one of the record’s strongest features is the deliberate intention of the producer to develop his own musical research bringing it to unreached lands (considering the UK scene of these years, at least). He’s not the only one doing it, of course, yet his effords are so remarkable they let us to consider him being one of the leading musicians in the grime/dubstep(/whatever) continuum direction. As to say, Visionist is throwing out Something new rather then something old. Safe goes for Grime 3.0 already.

The record is about 33-minutes-long and consists of 12 tracks. The album sounds as an homogeneous and coherent piece of music. Few words are worth spending about each track. You Stayed is a out-of-tune monotonous chant, an almost tape-distorted introduction to the record. In the piece there are a few vocal samples that will be reprised in some other occasions later on through the album, most probably coming from the producer’s R&B background neatly surfacing. Victim is a half-virtual half-real gunfight, recalling some past dubstep/grime releases (in sounds and moods: Zomby, Burial, and many others). 1 Guarda is possibly the most atmospheric and accessible track in the record, sharing the common feature of the album’s tracks in which the main feature of the album, aka the feminine, processed and incredibly-high-pitched voices, particularly shines through. In I’ve Said Visionist shows how he had not been lingering in revolving around a particular idea and enriching it – and that’s of course a positive aspect of Visionist’s choices (as to say, a 1-minute-long track is as good as any others). I’ve Said is basically a very-brief crescendo ending up in a distorted take on a confused state of mind experienced by one of the characters evoked by the use of the multiple vocal samples. Vffected is one of the most remarkable pieces of the album, thanks to the extremely-high-pitched samples, a memorabile sound pattern (something almost like a “chorus”) and a sharp, metallic beat. Sin-cere is a wordplay-named track sounding like mechanical chimes. Nothing but high-pitched melodies and warm voices, as the primary tool of composition: Carillon melody for the years to come.

Safe is maybe the only noisy episode of the release, arousing a heavy feeling of danger strongly contrasting with its title. Voices are cut down to vowels and consonants, then put together and correlated in a grouchy, abstract composition. Some reverberating and backwards-played echoes introduces Let me in which incorporates acid sounds. There’s nothing left for the body but to contort, expecially when the glitchy beat comes in at the half of the track. A feminine hyper-processed voice asks: ‘Can you hear me?’. Too careful to care is unforgettable: distant whip and beeping sounds on the background, while on the foreground a phrase is obsessively repeated, its tone continuously changing. The dry out-tempo beat, sudden synth shifts and the only un-processed vocal sample define the features of this rich track. Tired Tears, Awake fears rips apart the listener with cold and loud cracks rising as the symbol of the mentioned fears. The veiled sadness erupts at about one minute and a half, and the tears fall abundant. Distant screams for love and delicate piano tunes complete the tracks. Constraint is a future-jazz track, the only one in which the beat is the starring character (and shockingly silenced out, 58 seconds later). Sleep Luxury closes Safe telling about dreamy lusts, groanings and moans. Harp melodies and a Burial-like vocal sample repeated uncessantly close the dry dream-like experience the listener had been brought in.

Safe is an artful album which may sound very difficult to dance to. Visionist has been abstracting the dancefloor all over the record. You are (as a listener / dancer) displaced on a limbo, in a region somewhere between the space defined by your own self alone at night, listening to his inner silence, and another hyper-dimensioned digital reality. The great ability of the producer is the way in which silence and quiteness compenetrates. Vacuum spaces stands as an overwhelming creative force, as heavy as the most loud beat one could use. Sampling is often used as tough an actual keyboard is being played, letting the human voice – together with the laptop – being the main instrument used.

London’s streets by night are maybe (or not?) one of the main sources of inspiration for the record. The vocal samples remind of the most hopeless Burial (or, putting it in a more proper way, the most possible South-London-er mood). The predominant insterest in human voice as an instrument comes also from Louis past musical experiences (he used to be a singer too). Therefore, is somehow explained the focus on manipulating and combining human vocalizations (“the voice is the most honest sound”) in order to reach stunning results (efficiently done, we feel to say). Below you can find attached, as a random example, a video putting together Burial’s notorious, demolishing track Broken Home (featuring a Sizzla sample) and some scenes out of one of Burial’s main sources of inspiration (as stated by himself in a very funny 2006 interview), Nil By Mouth by Gary Oldman. That’s a crossed-reference video edited by Landon Garrett (we do not own anything – Vimeo: here). Of course, is pure nonsense to refer a 2015 release to a 2005 one. Yet, Safe comes in some sort of continuity with South London Boroughs. Some takes of the mood of the city are undeniably permeating the most recent record’s music too. As to say, the Broken Home feeling has never weakened, being a moving force in inspiring London musicians over the years. Each one of them evolved and grew up carrying his/her future(/past) inside him/herself. Walking alone by night on a South London street.

WHO’S FAULT NO ONE BUT MYSELF / AND YOU KNOW