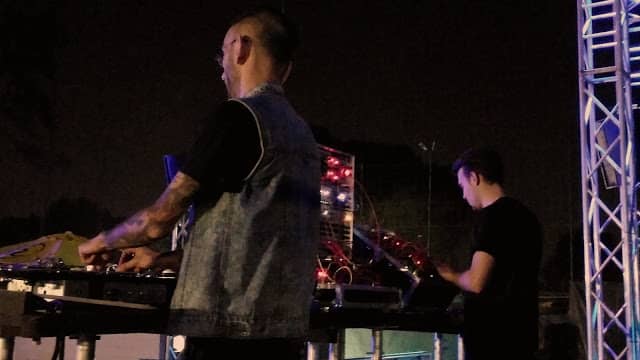 Balance are Luciano Lamanna and Davide Ricci. The former is a veteran italian producer based in Rome where he also works as sound engineer at Subsound Studio. Quoting his Discogs profile’s description: “In 2015 he started a collaboration with Davide Ricci from which the Balance project came to light – a conceptual exhibition based on improvisation through the use of modular synthesizers. His strength thus lies in the puzzle of sounds which is the fruit of the most desperate experiences from industrial, wave and electronic – all of which are knowledgeably tessellated through the art of improvisation.” Luciano Lamanna was born in 1977 and has been experimenting with sounds since 1997. His journey sees his participation in various projects such as Assalti Industriali, Der Noir and Lunar Lodge. It’s been a few years now that he’s an active member of the Italian collective of artists known as LSWHR; he’s also a resident-dj at Ex Dogana, Rome. “Authentic maverick, or better said, a free beater. His core values can be summarised in a handfull of key words: experimentation, analogical instruments, vinyl and Musick above all. From South to North, with a constant desire to have fun and grasp the right occasions, his career has become distinct due to its unconformity with the established norms. As sound engineer, dj, producer and remixer, he never turned down an opportunity of adding his personal touch in his and other’s tracks; initiating fruitful collaborations by injecting some of his essence in various projects“.

Davide Ricci was born in Brindisi in 1994 and he started to play in 2009. He was always fond of sperimentation and electronic sounds: in 2003 he entered “Scuola di Alto Perfezionamento Musicale” of Turin where he became sound engineer. His attraction for analog machineries and modular synthesis made him relocate in Rome: here he cooperates with Funky Junk Italy, leader in the trade of professional audio devices. Since 2014 he curates some sound engineering related activities at Minds In Lovely Karma studios, Rome. Today Davide Ricci is busy in the international distribution of Eurorack Modular Synths, and he also teaches synthesis classes.