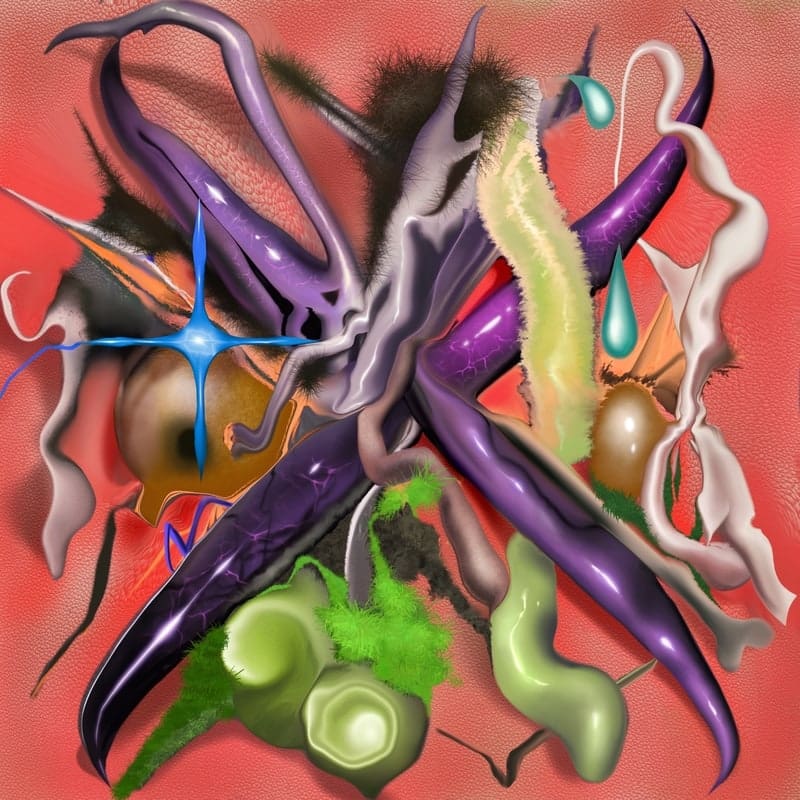 Maciej Maciagowski is an experimental musician and composer from Poznan, Poland who’s been active from the first half of the 2010s. Dwelling with sound collage, heavy rhythmic components, post-Internet muzak, and post-digital aesthetics, the artist’s aural compositions are lively mixtures of cutting synths and hopping melodies, crafted in the shape of one of the weirdest and richest music styles to date.

With several releases over the last few years (the GODDNADOG cassette on the Prague-based Baba Vanga, the DGGDRM tape on the Polish Pointless Geometry, and the OGOG EP on Trzy Szóstki), Maciej Maciagowski’s next LP will be released on the 𝓰𝓵𝓪𝓶𝓸𝓾𝓻.𝓁𝒶𝒷𝑒𝓁 outcome, stemming from Warsaw, Poland. The twelve-tracker called TURB0_OBRUT, an unrestrained masterpiece of hardcore minimalism and Internet weirdness, finds its perfect place in the catalog of the orgasmic label, always looking for audio post-pleazurez.

“This record is for foot-stomping and neck swinging”

Lately appeared in an in-depth feature about the Polish experimental scene on Bandcamp Daily, 𝓰𝓵𝓪𝓶𝓸𝓾𝓻.𝓁𝒶𝒷𝑒𝓁 escapes any genre, definition, and categorization. So far, the two founders Natalia and Julian have been releasing a broad range of sounds, such as “audio drama, electroacoustic improv, wobbly, harpsichord experiments, rusty gabber, even post-jazz“. Reportedly, their forbidden dream would be to release also a metal project at some point: this goes as a testament of the label’s interest in any kind of music that holds a cultural and artistic value, despite possible genre classification.

To this end, TURB0_OBRUT would be arguably the best record to fit in 𝓰𝓵𝓪𝓶𝓸𝓾𝓻.𝓁𝒶𝒷𝑒𝓁’s already rich inventory of intense, bright abstractions and humorous eclecticism. Maciagowski’s latest effort, blending singeli drums, digital-fabulous synths, Brazilian trumpets, and obsessive drum patterns, is an off-the-chart, remarkable record of post-Internet surrealism, strangely suited both for the club and for an art exhibition. Overall, the work’s visual equivalent would be a movie scene with James Ferraro’s demon brother, high on the latest synthetic drug, sitting in the video room of an illegal warehouse rave while watching a 300% sped-up video of SNES’ Battletoads gameplay.

Today, we’re glad to be premiering the 6th track of the album, namely GNOMIE, now available on our SC. The piece is a wide fanfare of high-tempo, fidgety percussions, coupled with distant vocal samples and compulsive melodies for a total length of just above 5 minutes: to put it in Natalia and Julian’s words, a “luscious, garish equivalent of capoeira performed by an imp“. Much recommended!

TURB0_OBRUT is now available for pre-order (both digital and physical) on 𝓰𝓵𝓪𝓶𝓸𝓾𝓻’s Bandcamp, scheduled to be released on October 1st 2020. Also, remember to support Maciej Maciagowski on Facebook and Soundcloud.