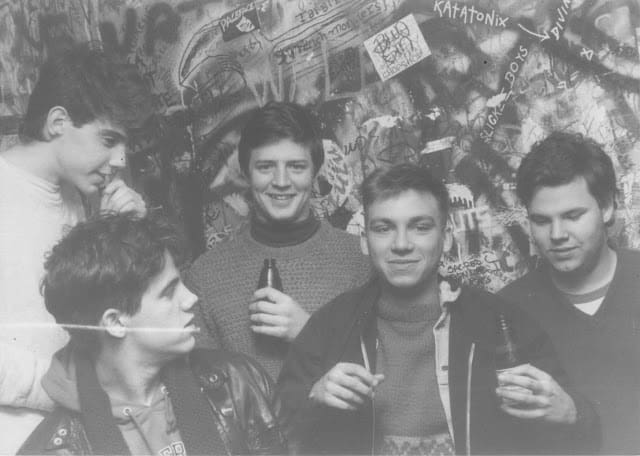 “Squirrelbait” is vaguely redneck slang meaning “nuts” (as in “crazy”)

Squirrel Bait were a bunch of very (very) young guys playing loud, fast music, which can be traced back to the “punk” genre, even if escaping many of its musical cliches. The band was founded on Halloween night, October 31, 1982, in Louisville, Kentucky by David Grubbs, one of the most inspiring and influential guitar player and musician over the last 30 years (just check at his Discogs page to have an idea about it), and now a College professor at Brooklyn College. Of course, many great musicians joined him (some random people like Brian McMahan, Peter Searcy, Ben Daughtrey, Britt Walford, Clark Johnson, ring some bells?). The years following the disbandment of Squirrel Bait saw the growth of a true LEGEND regarding them – despite some huge indie musicians had for sure noticed them, such as Hüsker Dü.

Everyone into his/her favorite 90s US band, looking back to the members’ past life, would most probably find some direct or indirect relationship with Squirrel Bait. What is ‘emotionally’ depicted in their tracks is some ghost of forgotten-not-so-forgotten sunset-by-the-beach adolescence (it would be superficial to associate it to Peter Searcy’s rough vocals only) that keeps being a heavy presence in one’s adult life. The problem is, there are no traces of seaside within hundreds of km around Louisville, where the band was born and used to play. Even more inexplicable, the average age of the band’s members was VERY low, below 19 yo even. They WERE teens indeed, how is it however possible to so accurately capture a mournful feeling and put it in a record, allowing it to be felt 30 years later unchanged? How did they manage to become profoundly mature in songwriting and playing at that age? How come every single track sound so raw and violent, original and essentially unheard before, emotional and heartbreaking at the same time? It is still mostly a mystery to us.

In this article, we’d like to ‘break’ some of the magic about it, by asking a few questions to David Grubbs, the founder. For the Band-Family Tree / Genealogy reviewed by David himself, wait for the end of the article.

I: Hi David. We appreciated a lot the fact you actually lost some of your busy time reviewing our Squirrel Bait Band-Family Tree, and agreed to answer a few questions about the band. Thank you very much for being so kind too, really felt there were no walls at all between you (the genius artist) and us (the emotional kids still-crying-while-listening-to-Black Light Poster Child). It’s not as common as one would expect, even nowadays when all the barriers have been ‘digitally’ burned down… people are still pretty much into themselves only, you know.
So, we’re bothering you about Squirrel Bait. Are you gonna beat us up at the end of this?

DG: Who can know the future?

I: There’s a tape sometimes surfacing eBay called Squirrelbait Youth. The members were you on guitar/voice, Clark Johnson on bass, and Rich Schuler on drums – there’s a track circulating on YouTube, here. What about the ‘Youth’ in the Squirrelbait Youth? You were about 15, were you guys just jerking around or had some serious intents?

DG: At first, completely jerking around. In the US hardcore scene at the time, there was a preponderance of bands with “Youth” in their name (Youth Brigade, Reagan Youth, Bored Youth) and as Clark and I were total smart asses, sarcastic fourteen-year-olds, one night we were so bored that we wrote a dozen or so songs and decided that the band should be called Squirrelbait Youth. “Squirrelbait” is vaguely redneck slang meaning “nuts” (as in “crazy”). It was a deliberately ridiculous name.

I: The line-up was the same on the following tape, the so-called (on the internet, at least) ‘demo 8-83’. Vocals seem quite good… why did you leave it to Searcy the following year? Was it a spontaneous thing, or were you simply not interested in singing at the time?

DG: Not only was Peter a great singer and someone whom we wanted to be in a band with (that’s often how you chose bandmates: who you wanted to have the excuse to hang out with), and also for maximum impact as a live band it seemed important to have a front person who would jump around and be insane. Otherwise, we’d risk being these introverts too worried about playing instruments.

I: There’s a last demo tape, usually referred to as the ‘Nearest Door’ tape. Besides Britt Walford on drums, the line-up is the ‘classical’ one, and ‘When I Fall’ and ‘Disguise’ out of it went in the first EP on Homestead. What were your musical influences at the time? There’s a track coming out of those sessions called ‘Only Silence is Golden’ in which some reggae vibes can almost be heard… Furthermore, were you guys into Leonard Cohen and Phil Ochs already?

DG: Yes, even if Squirrel Bait was in the process of refining our sound, I was increasingly omnivorous in my listening, really enjoying Leonard Cohen and Phil Ochs, but also the Red Krayola, the Thirteenth Floor Elevators, Sun Ra – just heading in many different directions at the same time.

I: Talking about the only live footage of the band available online: how old were you at the time? It seems to me you were not a teenager at all. You do look very young, yet your presence on the stage and your ability are great. It’s fun because you were kind of conducting the band through the song is in a very central position on the stage, like a master of puppets…

DG: That video is from Squirrel Bait opening for Hüsker Dü in the spring of 1985. I was 17 years old. At the time, it might have been the most fun, incredible day of my life. 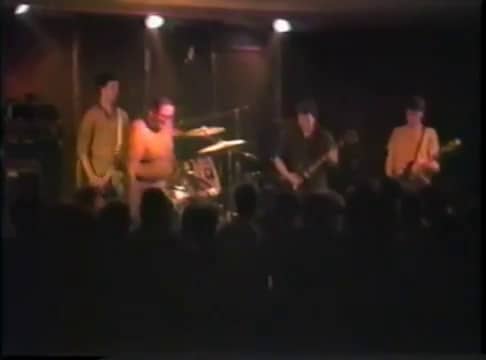 I: In the video, there’s a huge guy approaching Peter [see right above] who was laying on the floor. What happened?

DG: That was the Jockey Club’s bouncer, Clem Carpenter. Peter’s pants had fallen down around his ankles, and Clem was helping him stand up. I’m not making this up.

I: How did it feel then to open up the stage for them? How does it feel now? Are you in touch with Bob, Grant, and Greg, somehow?

DG: It felt fucking awesome! I have crossed paths with Grant Hart a few times since then, but I don’t think that I ever saw the other two again.

I: Rumors brought Squirrel Bait next to a Californian label before the s/t EP came out. Some said that a record was discussed, recorded but never released. Is there anything true about it? WAS IT SST?

DG: It was not SST. It was some tiny hardcore label that to be totally honest I can’t even remember the name of. We were going to release the studio recordings with Britt Walford on drums; these are the sessions from which we used two songs for the Homestead EP.

I: Who wrote the lyrics to the EP? We weren’t able to catch them all, yet we found they are mostly about trying, failing, self-confidence and self-improvement – ‘Perfect’ track is the perfect example of it. What can you tell about it?

I: Where did Ben get the idea of using a Vibra-slap?

I: What’s the speech in ‘Kid Dynamite‘ about? We heard a longer version of it in the live recording of the band playing @ 7th Street Entry, Minneapolis.

DG: I think it’s something like “Tiny people, tiny people! So small you can hold them in the palm of your hand! Prove they’re not real and win a hundred dollars.” It was something that a friend had heard at a carnival.

I: What about the band break-up? Was it painful? Did you guys ever catch up together in the same place after?

DG: I see Clark and Brian pretty regularly (every time I’m in Kentucky), Peter once in a blue moon, and Ben I haven’t seen in years and years. No hard feelings now, but at the time it was hard, certainly.

I: What does SB mean to you now? Have you ever looked back at and dreamed about those crazy years? Were they actual crazy years? The feeling one gets listening to the SB records is difficult to explain, it is kind of living the falling of the Celebrated Summer. In a way, something less romantic – or way more, you know? – and cynical than the Hüsker Dü song mood. Some Italian critic wrote (paraphrasing it) SB leads through a journey inside every kid’s consciousness-slash-hell. What do you think about it?

DG: It still sounds pretty damn good to me, but it also for me is 100% connected to 1985 or 1986, being 17 or 18 years old. I can’t say that I was going through hell – not even close – at the time, but 17-year-olds are justifiably impatient: want to be doing other things, want to be doing what you want to do. Playing with Squirrel Bait, at least for a while, was what I most wanted to do, and I’m incredibly fortunate to have been able to do so.

I: Thank you very much for your time, it’s been a huge pleasure.

[ David Grubbs, then and now.]

Right below you can find our possible version of the Squirrel Bait Genalogic-Band tree, drawn by Cristina Ruggieri who has taken inspiration in the CD artwork of Gastr del Sol’s The Serpentine Similar. For any comment or suggestion please feel free to contact us: [email protected] For a further look into the topics, see the Disco/Graph tree. Below the picture, you can find the web-bibliography and some further info, such as the only known interview of the band (1987, hilarious). Feel free to check out. Buy and listen to some SB record now. Support and bless David Grubbs.

He pulls a blade on the blade. Turns tail and needs to run,
to see more rises than sets. There ain’t nothing that he regrets.