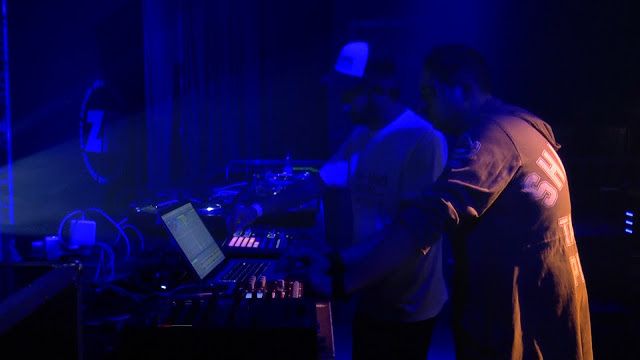 There, we got the occasion to witness Black Tears [Violet Poison + Giorgio Gigli]’ live world-debut show, that hit us so much we decided to give our own 2 cents about their The Long Decline record, out on Veleno Viola early this year; despite us being so late with respect to its release date, we still feel it’s worth recommending it, even with almost 1-year delay. Enjoy the read!

Black Tears is the Italian duo composed by Violet Poison aka Francesco Baudazzi, and Giorgio Gigli, who gained both an almost legendary-status as some of the most influent and adventurous producers in the recent years. The two artists come from different ‘techno’ generations, yet they managed working together and binding a strong relationship over the years. The latter published his first 12” way back in 2003, and affirmed his take on electronic music through the unforgivable Rome-based label Elettronica Romana releases between 2004 and 2006 [12” EP Chiki Disco out in 2004 is one of the all-time roman / Italian techno milestones], and many others on Mental Groove, Prologue, etc. The former, coming from La Spezia, one of the main Italian and European spreading and growing centers for Anarchism in the XX century, after being as Obtane one of the opening acts for the so-called headfuck techno season in early 2010s, decided to leave his old self behind and proceeded in cultivating his particular vision of BDSM aesthetic, feminism, violent death and Italian industrial-inspired EBM. In two words: Violet Poison, indeed.

Their collaboration dates back to 2009, the year in which the ZOOLOFT label was started. On their own outcome, the dangerous duo released several high-quality techno releases and tunes focused on heavy textures, deep dynamics, and also labelled by mysterious track- / album-titles; the activity together as ZOOLOFT ended in 2013 after a dozen records. Luckily enough, their bond and synergy had not faded away over the years: in late 2015 shocking news emerged about their comeback in the studio, recording under the new alias Black Tears. 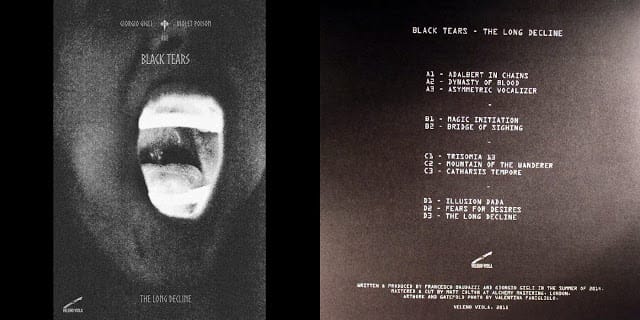 BT’s debut record came out in early 2016 on Veleno Viola, Violet Poison’s own label [started in 2015 after the partnership with Nino Pedone / Shapednoise ended], which is pushing ahead fetish, synthetic / 80s inspired sounds packaged in fine-built products like The Long Decline himself.

“Zooloft ended in 2013. Me and Giorgio went on different paths, thus we met each other again. He had listened to some VP records, and enjoyed them. We suddenly launched a dark, industial-music inspired alias. We decided to work together again us being real close friends, you know, the ones you share every single experience and emotion with. [..] The influences are many, from dark-wave, to rhythmic noise and obscure techno. We post-poned ‘The Long Decline’ release since we thought it’d better fit the winter. #10 track is almost a Christmas song…a lonely Christmas night by yourself, tough. The dominant aspect is, however, the ‘dark’ attitude, you know, being moved to tears, and to embrace strong feelings – there’s some “emo” in it. [..] The record is, again, an exponent of an unbiased Romanticism / Nihilism”. [Violet Poison on futurismi.it, fall 2015]

Black Tears’ debut on record is a colossal double-LP, about 55 minutes long and featuring 3 tracks for each side – except for side B hosting just two of the overall 11 pieces. The Long Decline is a cohesive work either considering its entire length and the different sides. The first one is entirely centered on pulsating and throbbing dub-techno, recalling some ancient Obtane & Gigli patterns; this time, however, the tracks are buried under an oppressive blanket of smoke-filled, sweeping sounds, echoing / distorted voices, and grave atmospheres, way distant to the past collaborations’ moods. Side B presents the most tensed-up pieces in terms of dynamics and beats: B1 and B2 are unrestrained parades that perfectly match with the titles the duo gave them, somewhat summoning ancient and dangerous magic ceremonies.

Side C is reserved for the noisy-est vibes, starting from the infamous Trisomia 13 [the title refers to the Patau syndrome, a shocking chromosomal abnormality that causes newborns to experience unspeakable deformations and premature death], all the way through Mountain of the Wanderer and Catharsis Tempore, seized by bothersome crackings and ground noise. The last three tracks, instead, reserve the most strongly-emotional moments [as stated by Violet Poison himself in the aforementioned interview]; Side D is simply something that you cannot miss: D1 kicks in as a cold-analogic dancing tune, hanging between anxiety and hesitant desperation; D2, our favorite track in the set [see also the Extra section here below], is even too delicate, tragic and ultimatelly hopeless for us to be able to provide a properly-fitting comment; finally, the eponymous ending track is a mixture of EBM hopping beats and industrial-ish noises that works as the perfect summary for the overall album.

The Long Decline is an outstanding record that you should buy this very instant, as we feel it’s also a precious object to own and jealously preserve. The Long Decline can be also considered as one the manifestos for the hybridation schemes underground electronic dance music underwent in early 2010s, and likewise regarded as one of the defining records for the shape of techno to come. That’s why we consider it being a Timeless record. [Some final technical informations about ‘The Long Decline’: the record was mastered at Alchemy Mastering by Matt Colton and pressed by R.A.N.D. Muzik; the photograph used as artwork is by Valentina Fanigliulo [aka Mushy]; all the tracks have been written and produced by Francesco Baudazzi and Giorgio Gigli in summer of 2014]