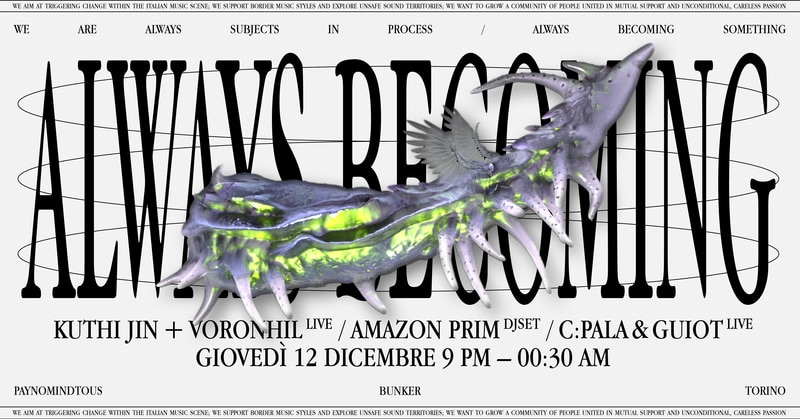 “the idea that we need to open up our sense of identity to relations to a multiplicity of other axes or entities is in opposition to the idea of identity as something completely closed, fully-formed, and static forever. we are always subjects in process, always becoming something” [via]

Amazon Prim is the moniker of Juanal Bel, DJ and producer from Brasilia, Brazil, now Bologna-based after a few years living in Rome. Club Tormenta affiliated, her mixes appeared on fundamental series and labels like Jerome and Salviatek. A diaspora child, her blend of baile funk, neoperreo, hardcore bass and obscure pop music, is a testament of her remarkable attempts of investigating and expanding the idea and feeling of identity in a hyper-connected yet fragmented society.
https://soundcloud.com/amazonprim/

Kuthi Jin + Voronhil, formerly known as Kuthi Jinani and Krolik, will perform their joint live set to unleash on the crowd a solid schizo mixture of bass and hardcore music genres such as jungle, grime, and footwork. Their show is the astonishing result of a stunning sound design, on a quest for crafting the dopest track ever yet. Sheer, uncontrollable bass violence presented at the beginning of their new, tumultuous-as-ever path.
https://clam-pressure.bandcamp.com/

NO SEXISM ◇ NO HARASSMENT ◇ RESPECT EVERYBODY