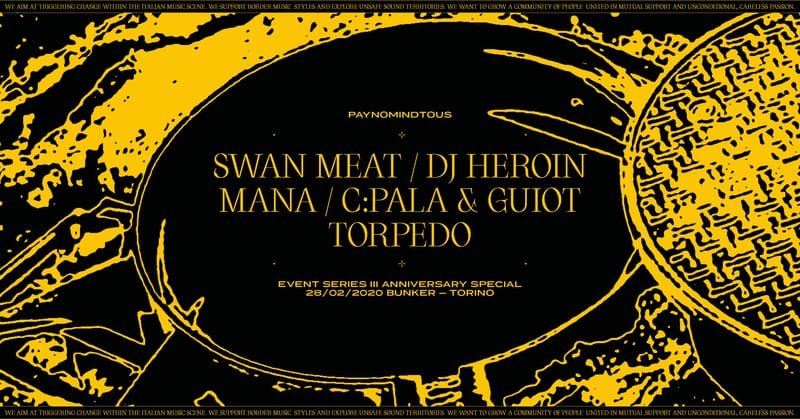 🕳️ SWAN MEAT ▬ Bala Club, Infinite Machine
“Swan Meat is a producer, DJ, poet, composer, and engineer currently living in Cologne Germany. She burst onto the scene with her debut EP, Bounty, at the beginning of 2017, and has since been highly prolific, releasing a series of terrifying singles and remixes. Her most recent single, ‘SATANS PRESET,’ brings her aesthetic to the boiling point of shots of energy flush with chiptune whorls, wry allusions to dubstep, heavy trap percussion, and floaty string arrangements”

🕳️ DJH ▬ Live From Earth, Mäss
“DJH is a musician and producer working at the outer edges of electronic music and contemporary rap production. Through emotive melodic excursions and compositions unafraid of embracing the beauty of digital audio processing artifacts, his music shapeshifts between boldness and timidity”

🕳️ M a n a ▬ Gang Of Ducks, Hyperdub Records
“Turin-based composer, sound designer, and producer Daniele Mana has been active since the early ’10s. 2019 marked the publication on the seminal London-based Hyperdub of his debut album ‘Seven Steps Behind‘ under the new moniker M A N A, a collection of visions taken from his subconscious through lucid dreaming, hallucinations, and meditation”